Your Success Strengthens Our Reputation

Throughout nearly five decades, Southwest Contracting Ltd. has built one of the strongest and most successful excavation and shoring companies in Western Canada, tackling challenges and providing solutions for a diverse client list and constantly updating its technologies and equipment.

So it stands to reason that SWC’s three partners, Will Pauga, Jason Rook and Gary Veldman each think it’s worthwhile to focus on the company’s legacy as it builds for the future.

“We try to honour the company’s founders, the Geransky brothers. They started Southwest back in 1972 and were true professionals and pioneers in the business. So were the subsequent ownership group who worked so hard to build on the original model,” explains Will.

“That’s exactly what we’ve been doing as well. We know every new ownership group has its own style and its own goals, but we all worked within the culture of the previous owners and that’s something we wanted to keep – and expand on.”

“For one thing, staff retention is a big plus for us. Everyone was treated like family over the years, and that’s the way we are today.”

The values originally espoused by company founders Lloyd and Wes Geransky, learned in their youth through their work with their dad on the family farm in Hepburn, Saskatchewan, survive today, in part thanks to the leadership of the next ownership group, Scott MacCara, Rudy Froese and Kevin Ronning. 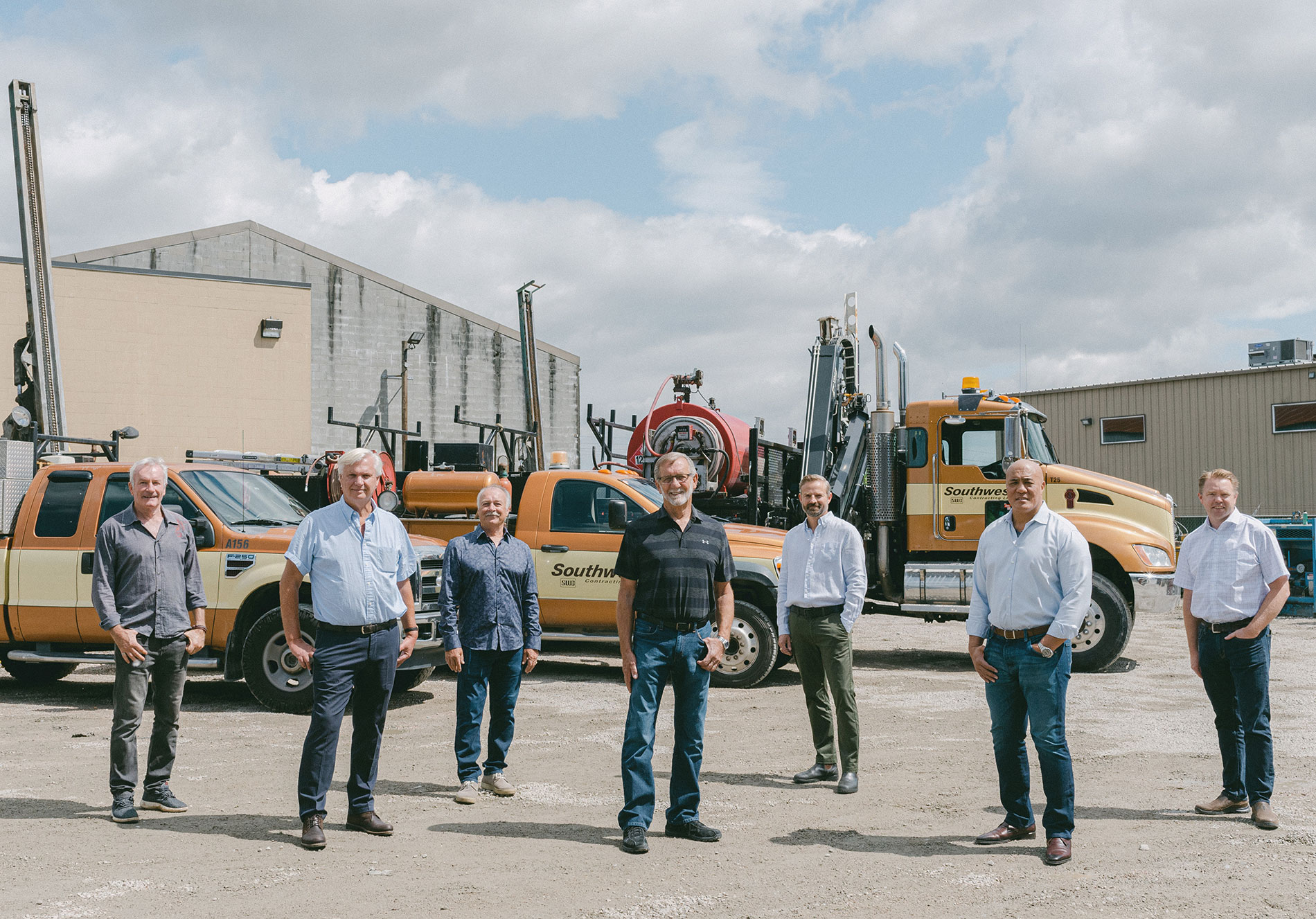 “When we took ownership of SWC from Scott, Rudy and Kevin, we brought in strong performers to fill our previous roles. We looked for people that had the same sort of ideals we had – whether an estimator or an engineer or a field guy.

“I’ve always had a genuine loyalty to the company. Scott, Rudy and Kevin treated me well, so in 2012, they suggested we take over from them. Jason, Gary and I were happy to take up the challenge,” Will remembers.

For Will, Jason and Gary it’s been an ideal partnership. “They wanted to hand the company off to a team that would keep it together and keep the group strong,” Jason recalls. “Our approach has been to be really good at what we do — and that means getting the right people together.”

You can see it in some of the recent projects SWC has worked on throughout Western Canada, as well as the dozens of jobs SWC has completed over the years. For example, SWC’s work on Vancouver House won the Vancouver Regional Construction Association’s Gold award for its role in overcoming a series of technical challenges. Today the stunning building, designed by Danish architect Bjarke Ingels and based on a triangle that rises from the ground and gradually transitions into a striking rectangle, is a much-loved addition to Vancouver’s skyline.

The team takes similar pride in the TECK Acute Care Center for the BC Children’s and BC Women’s Hospital. Built by Ledcor, the project contracted SWC to provide all civil work, as well as excavation and shoring. From installation of the sanitary and storm sewers to installing a water main, communication ducts, an Atlantis-D storm tank and a decontamination tank, the project showcased SWC’s depth and versatility, as the company used all its divisions for the mammoth job.

SWC’s involvement in the Evergreen Rapid Transit Line is another prime example of SWC pressing all its divisions into action to provide the versatility and efficiency needed to bring the project to a successful conclusion. The SNC-Lavalin – Graham Construction Joint Venture, SGJV, required three phases of shoring and excavation beneath eight lanes of arterial road to establish the launch pit for the Evergreen Line Tunnel Boring machine in Port Moody, BC.

The $500-million Vancouver Convention Centre, a centrepiece for Vancouver’s 2010 Winter Olympics Games, showcased SWC’s expertise in managing the dynamics of tidewater. And the David Avenue Connector, launched in early 2004, involved constructing a kilometer of 4-lane arterial road through central Coquitlam, including a major crossing of the Coquitlam River and a smaller one across Hyde Creek. SWC provided a huge range of services from excavation, filling and grading, to asphalt, storm sewer, water main, street lighting and signals.

But there are few examples of modern infrastructure projects as important to BC’s development as the Coquihalla Highway, the 186 km stretch of Highway 5 that’s known South of Kamloops as the Coquihalla Highway. SWC’s participation in building this key link from the BC Coast to the Interior remains a point of pride. SWC credits the ingenuity of its founders, the Geransky brothers, in securing the $9 million multi-year job that, in the 1980s and ever since, served to strengthen the company, raise its game, and broaden its outlook.

“Going forward,” Gary explains, “we’ll stay totally focused on a commitment to excellence, innovation, and providing efficient solutions to all our construction clients.”

How does SWC maintain its vision of being the best in its field? By ensuring it provides the maximum level of service through the highest-quality work, and by ensuring its construction clients are successful in what they do.

After all that’s been their winning formula for almost five decades.

Ask us how we can work together to advance your heavy construction goals. From shotcrete shoring, jet grouting and bulk excavation, to underground utility installation, road building, hydraulic drilling for tiebacks, seismic anchors, and micropiles, SWC is synonymous with quality, reliability and innovation.